News
You are here: Home1 / About Us2 / News3 / Mobility4 / My first year with an electric vehicle. 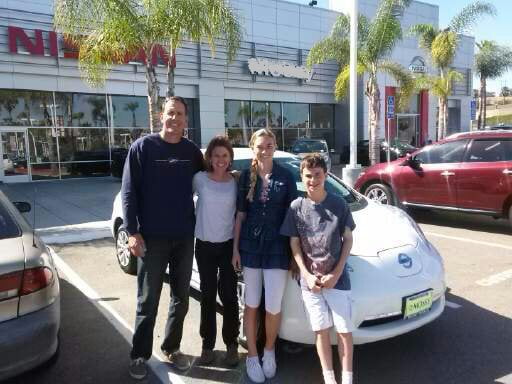 My first year with an electric vehicle has been very interesting.

Buying a vehicle is a major purchase.  So, like most married couples, my wife and I discuss and agree upon all major decisions before hand.  In this case, it was my idea, so I decided to “test the waters” first.  During casual conversations, I asked about her perceptions of electric vehicles.  For the most part it was neutral to positive.  Positive on the environment and probable cost savings.  By far, her biggest concern (and mine) was the range.  So, I quietly started logging daily miles and found both vehicles were under 40 miles each day.  Better than expected!  It dawned on me that since both cars spent most of their time in the garage, with the keys on hooks next to each other, they really didn’t need to be “his and her” vehicles – they could be pool cars.  One for short commutes, one for long range as needed.  If we both had a long trip, we would have to plan for it anyway and could rent a car if needed.   I was convinced.  Now I had to get her on board.

So, I asked her if she would try to plan her daily trips a little better to see if she could reduce the wear and tear on our aging SUV and reduce the huge gas costs.  She did and her daily mileage dropped about 25% which also saved her a lot of time.  So, I tried a little psychology and suggested we both switch to EVs.  After a few dinner discussions, she suggested we try one and see how it goes.  Bingo!

Now that she was on board with the concept, we needed to decide on which one and how to pay for it.  We ultimately decided on the Nissan Leaf as the size, headroom and storage was optimal for our family.  I’m tall (6’5″), have two teenagers and we frequent the beach.  The Leaf was the most practical at the time.  So, when my wife took the kids to to take a look, they went to the dealer and walked right past the Leaf.  My daughter said, “I hope it’s not that ugly one over there”.  As it turns out, it was, which of course delayed the decision.  But, like any new design, you start noticing them around and it grows on you.  After a week or two, she recanted her perception and we had everyone on board.  (No, our kids don’t make our decisions for us, but we weren’t in a rush either).  After deciding on our personal preferences and financing, we drove off the lot in our shiny new EV.

While we were shopping, I diligently researched charging options and how we might handle trips beyond a single charge.  From prior experience, I already knew there were several companies developing competing charging networks.  Something akin to video tape wars of long ago that ended up being displaced by DVDs anyway.  Since most cars spend most of the time parked at home or at work, the charging “network” is irrelevant for a commuter car.  Since that was true for us, my focus was on just using the 110v outlets in the garage or adding a 220v (Level 2) outlet.   Luckily we have a gas dryer which frees up an outlet.  Even if I didn’t have that, the panel had enough capacity to run 220v to the garage – if needed.  Ultimately, I decided to try out the regular 110v outlet for awhile and see how it worked.

A year later and we’re still using just the 110v outlet.  However, we may add the 220v outlet to speed up charging during utility “off peak” hours or during our own “peak solar hours” when we add solar to the house (another story).  Basically, we just plug it in every night (after peak utility rates) and it’s full or nearly full in the morning.  The manufacturer states that charging to 100% can degrade battery longevity, so just under full is quite alright.  On occasion we may forget to plug it in at night, but after the first time, we’ve gotten in the habit like checking the door locks before turning in.

I’ve only needed to “fill up” while driving a couple times over the last year.  Once or twice because we forgot to charge the night before and the other car was in use.  So, I ran low, but found plenty of options nearby via the PlugShare app on my phone.  Other times were on longer trips beyond the “single tank” range.  I have found that most EV dealers have a high speed (Level 3) charger on site for free “customer” use. Or, there are proprietary networks to choose from.  However, I can’t see why any vendor would limit access (sales) by requiring a membership vs convenient point of sale model like the gas stations have?  In all, we’ve only had “range anxiety” a couple times, but always found an option.  Sometimes the wait was longer than we’d like, but overall not a big deal.

The overall driving experience has been great.  Thanks mostly to the engine.  Not to diminish automotive engineering, the greatness of the EV is simply the propulsion choice.  Electric motors are far superior to a reciprocating engine in almost every facet.  They accelerate faster which means they are safer for driving.  They are quieter and smoother which means no loud noises annoying the neighbors or your family.  They don’t pollute so you don’t choke everyone behind you in traffic or the kids while waiting for pickup.  They don’t require gas so no more smog checks, constant tuneups or sending our kids to “fight foreign wars”.  Or as many generals have said, “die transporting or protecting oil interests”.  They have very few moving parts which means they are much more dependable, easier and a lot cheaper to maintain.  They are far more efficient.  An electric motor is 90% – 98% efficient while a gas engine is only 26% – 30% efficient.  With batteries mounted low in the vehicle, the center of gravity is lowered which means they inherently handle really well.  The only question I would have is, why weren’t they offered a long, long time ago?

While there are some features and improvements I would make for my car, the experience of owning an electric vehicle has been absolutely outstanding.  Since California has proven that EV’s work and are truly viable (in fact preferred), I hope that all other states follow suit and mandate zero emissions vehicles to spur mass adoption.  With high volume pricing and availability, demand will surely grow and gas engines will be relegated to backup sources like they are for buildings and manufacturing already.

Two years later and we still love our electric vehicle.  In fact, it’s had quite an impact on our family.  One of the fun perks for me has been at the starting line, er um traffic lights.  On occasion or three, a kid with a noisy “rice rocket” will end up at the light next to me and I have so much fun seeing the look on their faces (in the rear view mirror) when the family car leaves ’em in the dust.  As for my kids – absolute converts.  One of the statements heard while sitting in congested traffic, “Why would anyone choose to drive a noisy carcinogen-belching machine when a clean, quiet (and much quicker) digital device is available.  Even the stodgy car enthusiast at CNET is becoming a convert.  As for the gas burning SUV?  That’s now backup only and sits in the garage most of the time.  When my daughter heads off to college (BioSci/EnvSci major) in the fall, we’ll dump the SUV once and for all…

Man or Planet?
Scroll to top