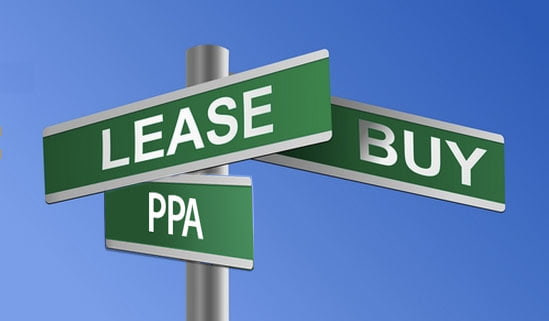 What’s the difference between a solar lease and a solar PPA?

In short.  Not much.  These days it’s mostly just the name, but here’s the skinny.

In a Power purchase agreement, you are agreeing to buy the power – whether you need it or not.  A third party is financing and building the power plant on your site with the deserved expectation that you will buy the commodity it produces so they can pay off the investment and make a profit.  This is basically what electric utilities have been doing for over a hundred years.

In a lease, you are leasing equipment.  A third party is financing and building the equipment (e.g. solar power plant) on your site with the deserved expectation that you will pay off the hardware over time.  When the lease is paid off you can usually “turn it back in”, buy it out at a predetermined residual value, or extend the lease term.

So, bottom line for a solar lease vs. PPA:

While both these options are good for low cost financing, there’s not a huge difference when it comes to a solar Lease vs. PPA. If it saves you money and you like what you see, go for it.

Now 3fficient is offering a new option.  It’s called an energy services agreement (ESA).  This new financial model is similar to a PPA or Lease, but instead of just solar, you can get various efficiency upgrades too.  Basically, by agreeing to host our smart microgrid on site and buying power at a lower cost than the utility, you’ll also get a myriad of building and process upgrades included.   Like a PPA, you will not own the energy equipment so it will not impact your credit rating or borrowing power.  You’ll be free to use your credit for important purposes like say, growing your business.  You’ll get resilient, clean energy that will “keep the lights on” even when the grid is down.

Either way, you have nothing to lose by getting a quote from and comparing the financial pros and cons. Upon request, we’ll even give you both options, so you can compare an energy services agreement with outright purchasing.

Are the days of ICE numbered?
Scroll to top