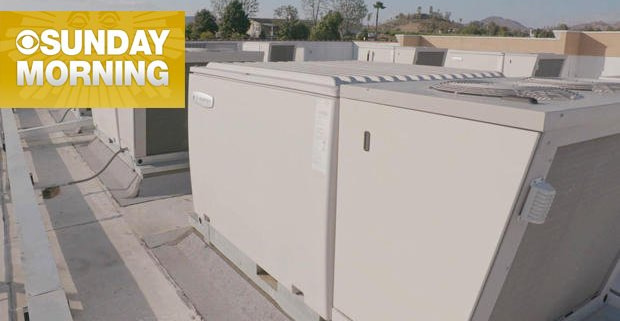 Commercial buildings use more electricity than any other building type in the US.  Roughly 65% according to DOE statistics.  But, the problem is WHEN they use energy – daytime and early evenings.  That creates a problem for the power grid which falls short throughout the day and has too much at night.  Energy storage solves that problem.

So, in the race for better batteries, scientists are re-discovering…  basic science still holds true.  The KISS principle (Keep It Simple Stupid).  Instead of hunting for exotic new materials that are hard to find or unsafe, building experts like 3fficient are relying on one of the most plentiful, sustainable materials on planet Earth.  Good ole’ H2O.  Ice Energy, has been making ice storage for utilities for several years now, but recently, they have partnered with 3fficient to design and install pre-packaged ice storage units that bolt directly to commercial a/c units.  After a little engineering and mechanical connections, these “ice batteries” create ice at night with their super efficient compressors and then the melted, ice cold water runs through the a/c unit coil to blow perfect cool air into the space below.  Since it’s a closed loop, no additional water is needed so the storage medium lasts and lasts and lasts.  The initial water comes straight out of the spigot.  The compressors are commercial grade and have a life at least 200% – 300% longer than Tesla and other Lithium batteries.

Daytime a/c energy use gets cut by 90 – 95% which saves a lot of costs for the customer.  More importantly, it reduces the need for more expensive solar power or (in comparison) short-lived electric batteries.  For utility customers on a time of use rate (most commercial customers and soon everyone in CA), the short term peak demand (kW) charges are a huge portion of the bill.  Most buildings have a daily power spike when everything is on, especially all the a/c units.  That 15 or 30 minute spike can cost dearly. as it sets the bill for the month or even the year. So, when you have a plug n play tool that reliably levelizes your daily power curve, you’ll save a lot of money.  Utilities will love you for it and so will your bottom line!

While exotic “invented by Nasa engineers” tech may seem cool, sometimes “old school” is even cooler!  Check out this Nova Video about it called, Making a better battery, featuring David Pogue – the gadget guy.